Boko Haram: Winning the peace after the war by Austin Okere 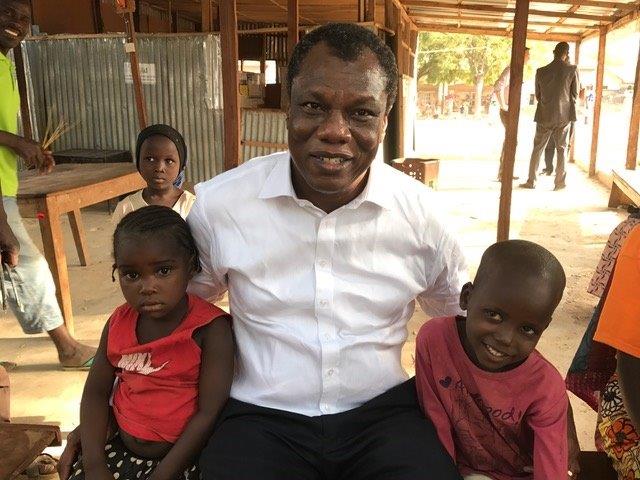 I was recently in Yola at the invitation of the America University of Nigeria (AUN) to give the keynote address at the maiden business and entrepreneurship boot camp. I was very enthralled by the school and have written about my visit and the pleasant interaction with the young minds, over 200 of who turned up for the boot camp.

I took the opportunity to visit the Internally Displaced Camp (IDP) at the Saint Theresa’s Cathedral, Yola. This was a very surreal experience for me; about 1500 people (there used to be 4,000), mainly women and children cramped into the compound, and sleeping in a large hall that I learnt was the former church building (the church has moved to a new building within the compound).

There were flimsy cloth partitions demarcating the small spaces occupied by each family. The obvious answer to the question I posed about the men, flooded me with sadness; most have died fighting to defend their communities. Duduwara Dawa is one of the very few displaced men at the camp. 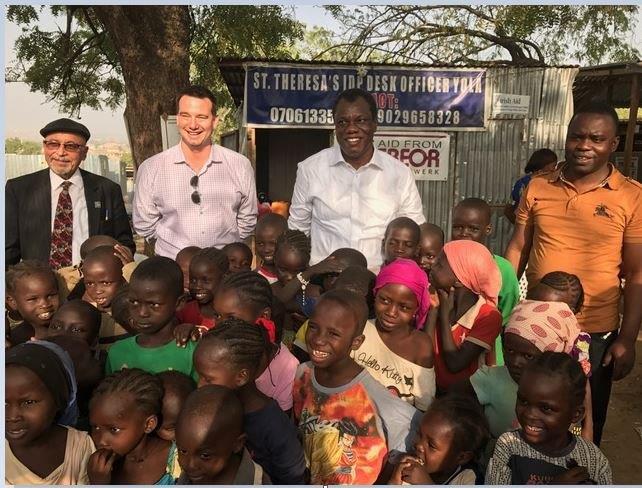 The camp coordinator Fr. Maurice Kwairanga seemed yoked to the community and showed tremendous care towards the children within the limited resources available; and they really need help by way of food, clothing and other materials. There were also volunteers at the camp doing a very good job with co-ordination such as Jennifer Moses; I salute their sacrifice.

I accompanied my host and Dean of the AUN Business School, Dr. Ahmad Hossieni to the camp. He had scheduled this visit at the request of the mother of Jon Eberly, the second keynote speaker from a Silicon Valley technology company, Clock Four. Jon’s mother, who is a member of the Rotary Club, had visited the camp previously and wanted some gifts delivered through her son.

Apparently, among the gifts that she brought in her previous visit were 75 base balls. Seeing that the balls did not go round, she had crafted an ingenuous way of making all the children happy; soccer balls! Jon had brought with him a box of half a dozen soccer balls and Ahmad had an additional three balls. 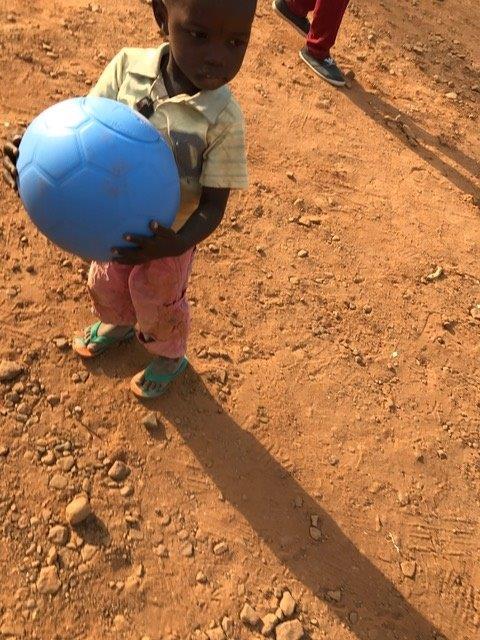 The sombre look about the children when we arrived, accompanied by sweet sounding Hymns they sang to welcome us evaporated into ecstatic joy when we unveiled the balls from the boot of the car and kicked them into the crowd of kids. The camp came alive! Boys and girls all joined in the fun of kicking the balls about. I have never seen such happiness. How little it took to lift the human spirit, and what joy is felt by the messenger of such happiness.

I formed a ‘special friendship’ with two of the little children, Nancy and Tabita. I also got to see the roar talent of Esther Ibrahim; a little girl of about 8 years, who could do wonders with a soccer ball. She is clearly naturally gifted and will do very well in a soccer academy where she can hone her skills and possibly make a future career (any takers?). 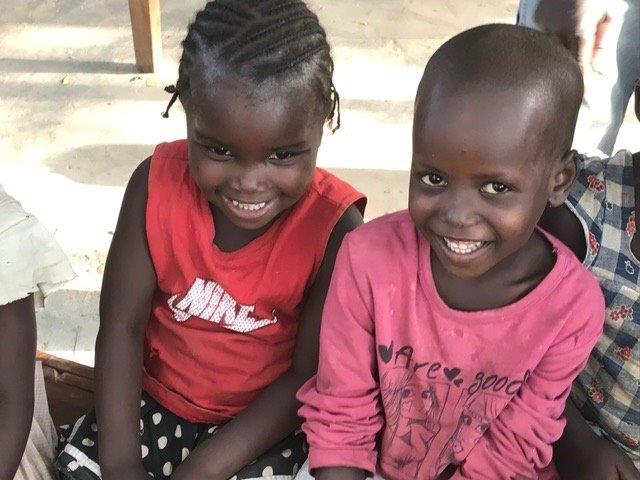 At my hotel room at AUN the previous day, I heard the erudite Maj. Gen. Lucky Irabor of the Nigeria Army giving an eloquent account on television of how Boko Haram Camp Zeiro in Sambisa forest was captured. What struck me as very instructive, was his charge that we work hard to win the peace after the war. The military have done their part and gallantly too. They have defeated Boko Haram, but the real work is now up to you and I, and all Nigerians; winning and securing the peace. We have to learn to be our brothers’ keeper. We have to show compassion to resettle all victims of the insurgency and rehabilitate the ones among the transgressors that can be redeemed. We need to be open handed with our generosity.

It is incomprehensible to grasp, and very disheartening to learn that people in high places diverted relief materials meant for the IDPs to be sold in markets for their personal gain. We must really have deadened our consciences to steal from the poor and helpless in dire situations such as these.

To dimension the scale of the problem, I understand that there are more than 2m displaced people, of whom 300k live in Camps. The rest are perhaps staying with relatives in safer areas. I was deeply shocked and touched when Margee Ensign, President of the AUN told me that at one point, a driver of the school had 50 people taking refuge with him. Needless to say that AUN herself took in a large number of displaced persons. 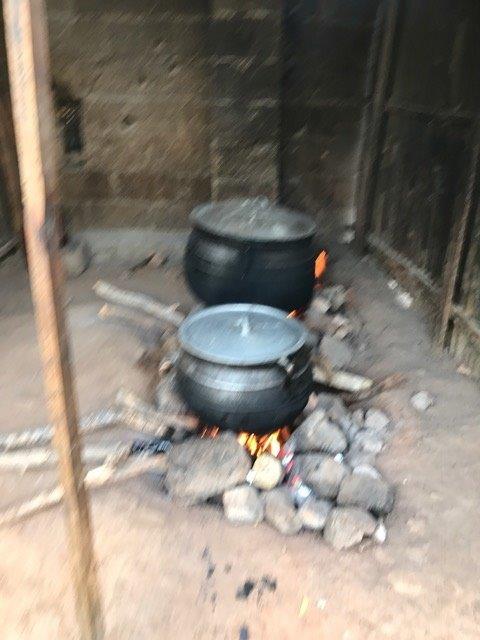 Imagine what it takes to feed 1500 people

While I was very saddened that a suicide bomber claimed precious lives at the University of Maiduguri, I was comforted by the defiance of the School not to succumb to terror, by continuing academic activities including the first semester examinations.

The mistaken bombing of an IDP Camp at Rann is very unfortunate, and our hearts go out to the dead and wounded (may their souls rest in the perfect peace), but this should not be the defining narrative of the Nigerian Air force, which has displayed exemplary bravery and played a very key role in dislodging the Boko Haram from the stronghold of the Sambisa forest. 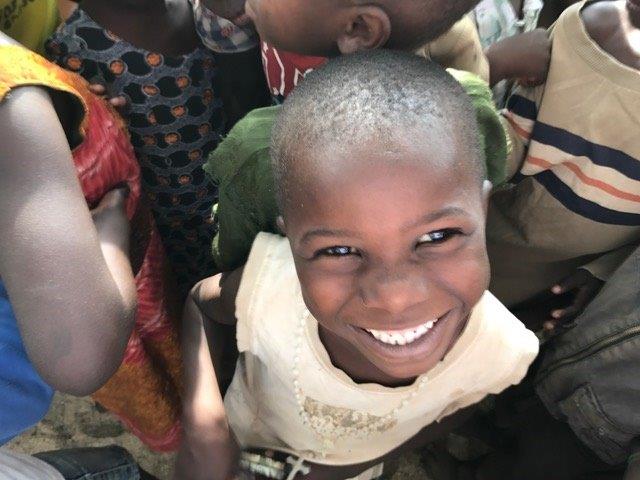 Hope in her eyes

Finally, I have secured the permission of Rev. Fr. Maurice Kwairanga to share his contact number (0706 133 5640). I have also secured the contact details of the President of the Rotary Club of Yola, Mr. Anthony Okoji (0706 322 1747, 0805 218 5703, anthoni.okoji@gmail.com) who escorted us to the camp and whose society is deeply involved in their welfare. If you feel moved to do something concrete to help, please do contact them directly. Every little assistance will go a long way. May God bless you abundantly in the kindness of your response.

Austin Okere is the Founder of CWG Plc, the largest Systems Integration Company in Sub-Saharan Africa & Entrepreneur in Residence at CBS, New York. Austin also and serves on the World Economic Forum Global Agenda Council on Innovation and Intrapreneurship