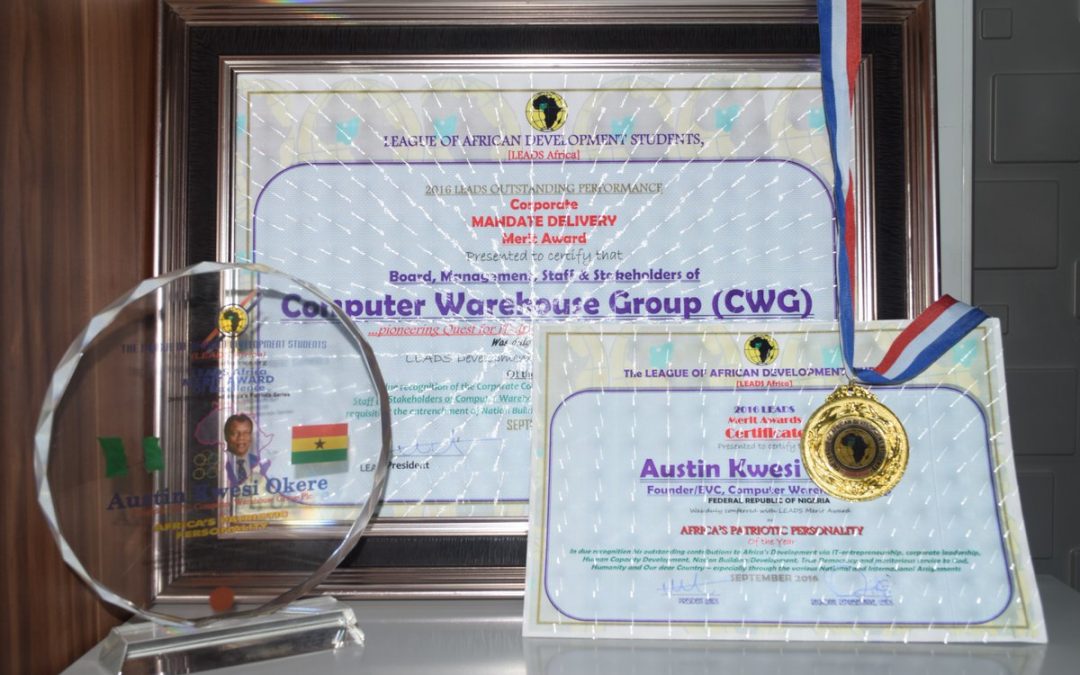 Austin Okere, the founder, CWG Plc, the largest Systems Integration Company in Sub-Saharan Africa, has been named Africa’s Patriotic Personality for the year 2016 by The League of African Development Students (LEADS Africa).

The League of African Development Students (LEADS) is the umbrella body for all democratic students unions in Africa. It was founded at the Bayero University, Kano in 1985, with the objectives of sensitizing members on the best development practices and celebrating remarkable personalities on the continent.

Speaking at the presentation ceremony, the president of the body, Oluoha Wilson, observed that Austin Okere was considered for the honour because he had played a crucial role in the technology revolution experienced by the continent. According to him, “Austin Okere, alongside his indefatigable team, played a prominent role in the entrenchment of a robust IT-development mandate in Nigeria, pioneering Africa’s quest for development over the years.”

“He is a recipient of the LEADS Merit Award of Outstanding Pan-Africanist patriotism, remarkable Strides in ICT development, selfless and dedicated service to God, humanity and country”, he concluded.

In response, Austin Okere thanked the body for the recognition and dedicated the award to the Young Africans that are striving to make an impact in their communities in spite of the apparent restraints imposed on them by their environments.

According to Austin, “Now is time to celebrate the young Africans, and tomorrow’s leaders, as they hone their skills today. If we encourage these aspiring heroes, very soon, their budding efforts will become a mighty wave that will make the continent the destination of the future.”

This adds to Okere’s robust roll of recognitions and awards.  He was named the ICT Personality of the year 2014 by the Nigerian Computer Society. He is also a recipient of the NCS special Presidential Award in 2016, in recognition of his invaluable contribution to the growth and promotion of ICT and enhancement of professionalism in the sector. He was listed on UK’s C.Hub Magazine’s 100 Most Influential Creatives in 2016.

Austin Okere is an entrepreneurship enthusiast. He is focused on mentoring and inspiring young people around the globe to achieve their full potential. He is an Entrepreneur in Residence at the Columbia Business School (CBS), New York and a member of the World Economic Forum (WEF) Business Council on Innovation and Intrapreneurship.