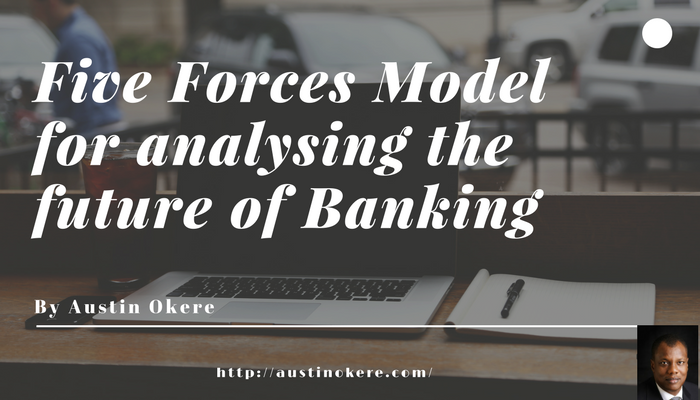 Having enjoyed centuries of monopoly, assured by the support of regulation, including through stringent requirements to new licensees, the erstwhile secured future of traditional banks is facing a heightened threat of disruption from Financial Technology companies (or FINTECHs), who are exploiting pent-up customer dissatisfaction and new technologies such as blockchain, coupled with the significant boost in smartphone adoption and pervasive broadband to disrupt the sector. The foundation of the Fintechs’ disruptive model lies in a peer-to-peer model for transactions, without any middleman or Central Authority in mind. A model that will possibly render the current establishment totally redundant and irrelevant.

The biggest threat to the banks has been precisely their seeming success. Centuries of relatively significant higher returns, even in the midst of economic downturns that adversely affect the real sectors, has engendered an attitude of invincibility and pomposity, characterised by a loss of touch with their customers.

Considered too big to fail, they take it for granted that they will be bailed out with taxpayers’ money in the event of any missteps – a perfect prey for disruption.

There are indeed five forces that will define the new face of banking:

1. The banks – traditional and established, best with cash and ancillary instruments

4. Currencies – traditional, such as cash and cheques; or Digital, such as bitcoin or other cryptocurrencies

5. Customers – the weight and force of their new found voice. Typically, they clamour for whatever will give them convenience and lower costs. 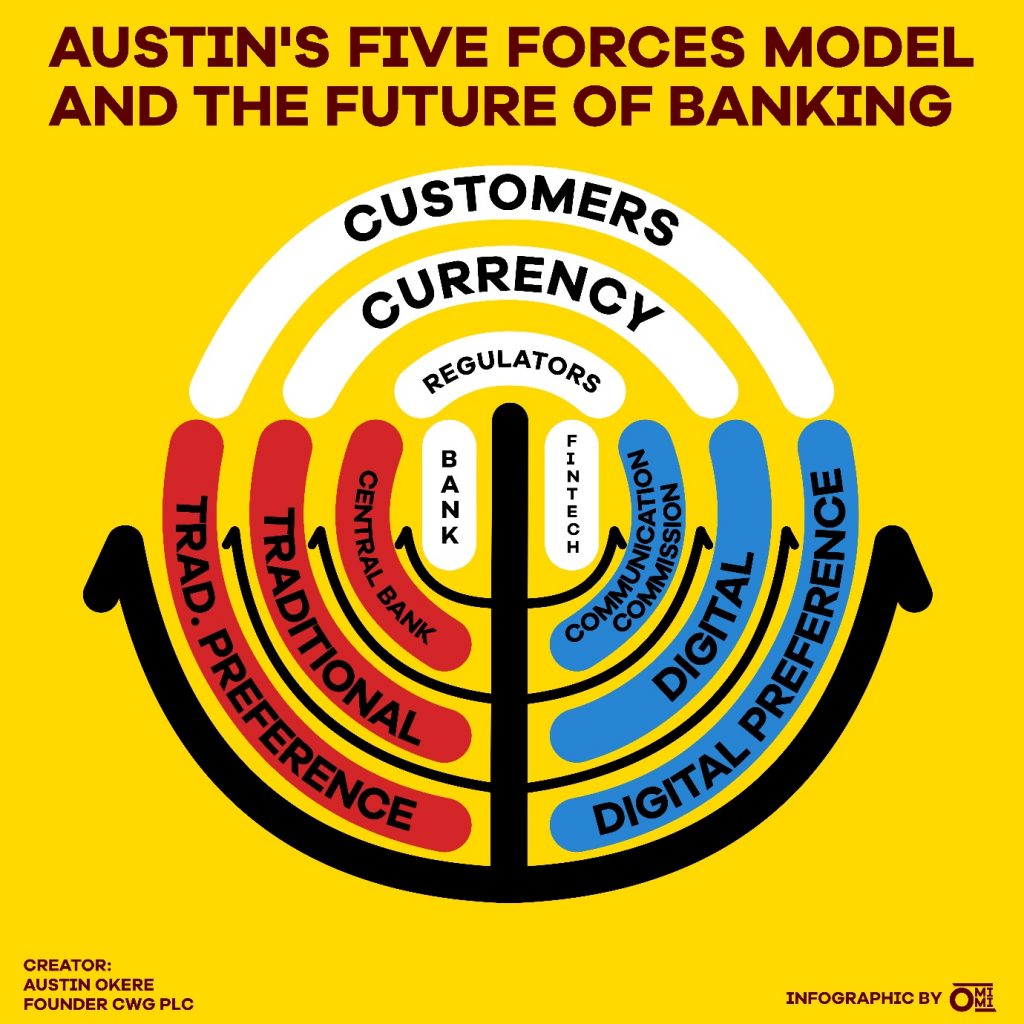 Customers are the most significant force, and represented by the outermost sector of the concentric circles. As they tend more towards a preference for digital currencies, the Fintechs will tend to assume a more prominent role in the new face of banking, and the Regulatory regime will inadvertently tend towards the Communication Commissions under whose purview the Fintechs fall. This will introduce a regulatory imbroglio, as future ‘Huge Banks’ may fall outside the regulatory ambit of Central Banks (as seems to be the case with the MPESA mobile money platform, through which 25million Kenyans transacted $28billion in 2015, representing about 44% of the country’s GDP. Safaricom, the telecoms promoter of MPESA ironically falls under the regulation of the Communications Authority of Kenya rather than the Kenyan Central Bank). 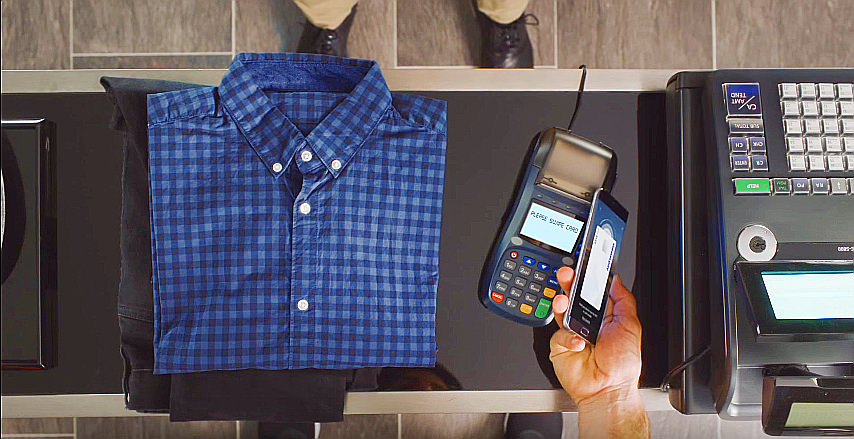 The essence of the Austin Okere’s Five Forces model is to enable players equip themselves with the imperatives that will ensure that their business is continuously relevant in the sector. It helps to guide the formulation of your prediction based on the following considerations:

·        whether there will indeed be a disruption

A correct application of Austin’s five forces model will define the difference between whether you continue to be in business, or whether your business model will become irrelevant and redundant.

Even though I developed the Austin’s five forces model, primarily to analyse the direction of the future of banking, the model can also be used to analyse any industry which is susceptible to disruption from the pervasive blockchain technology; including Real Estate; e.g. EY’s Australian operations piloted a real estate blockchain ecosystem that is now being used in the market to trade full, and even fractional ownership of properties. And also Government; e.g. Ukraine has partnered with global technology company, the Bitfury Group to put a sweeping range of government data on a blockchain platform. Dubai also has an ambitious blockchain strategy to issue all government documents on blockchain by 2020.

I will like to acknowledge due credits for this work to all blockchain enthusiasts, whose previous works have provided valuable insights, and also to my dear Son, Iheomimi Okere, who is quite artistically inclined, and has been able to correctly interpret my model in an aesthetic schematic. 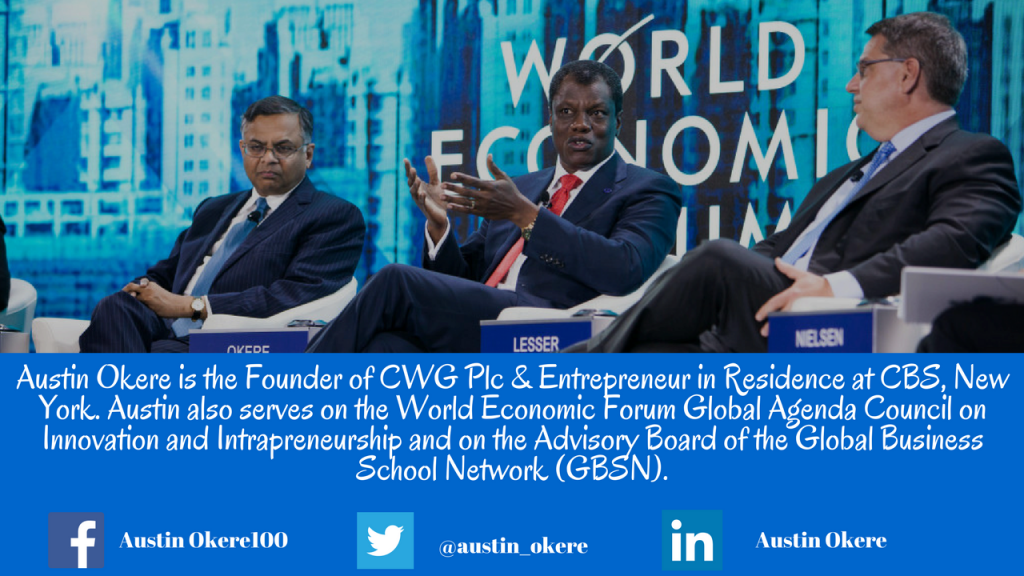